Art swipes. When artists copy from other artists. Another reason to laugh to Rob Liefeld ...

Already loving "Patsy Walker AKA Hellcat." Patsy debuted in 1944, predating Marvel Comics. You'll have seen her recently in Netflix's "Jessica Jones." The first issue is super cute and features She-Hulk. What's not to like?


I've been enjoying the Archie reboot by Mark Waid and (at first) Fiona Staples, and the Jughead reboot by Chip Zdarsky [Howard the Duck] and Erica Henderson [who also draws The Unbeatable Squirrel Girl].

I did the first draft of the colors [flatting] for Jughead issue 3 page 11, while having no idea what was going on in the story! The actual coloration changed for the final, which is normal. Probably more than usual since I hadn't seen the other pages. I originally put Betty in Gwen Stacy colors. One thing that survived - Betty's gun has orange on it, like a glue gun.

What's interesting is that at first the reboot feels like a radical departure, but pretty quickly shows that the writers have done their homework and are depicting the characters with all the traits they originally had, and classically had, just in a more believable context.

Beneath the surface it's all consistent with the past - Archie is oblivious and indecisive in love. He's cool but a klutz who can turn any situation into a disaster physically. He overlooks Betty because they've been friends so long. The girls like him and it doesn't get through his head. His car is a broken-down mess. He tries to impress the Lodges but screws it up.

Reggie is a jerk, Betty is down to earth, Veronica is too rich to understand anything.

Jughead is a food-loving slob who plays by his own peculiar rules, and is very clever about making his weird life work and not get into trouble. He's always a few steps ahead of everyone who would stop him, but with absurdly modest goals usually centering around hamburgers and shakes. He also has an active fantasy life. His interest in women is almost absent by comparison.
Support Me at Patreon! Art Gallery Facebook Tumblr TygerbugGarrett@Twitter Ocpmovie@Youtube
Top

Andrew Hussie's epic-length webcomic Homestuck is finally coming to an end after seven years. It unexpectedly updated today for the first time in many months.

Whether you know Homestuck or not, here's some art I've done of the comic's characters.

It's an objective fact at this point that Andrew Hussie's Homestuck is the greatest comic done for the web. A sprawling, impossibly long epic seven years in the making and relatively quiet for the last couple years, it's coming to an end now, though there will be spinoffs. Its popularity peaked a few years back but the fans remain.

Today, on Youtube, Hussie and company posted what isn't the finale to Homestuck, but is nearly so -- an eighteen-minute video in which the series' dozens of intrepid heroes and villains do battle with the fate of the universe at stake. A lot of artists were involved, and we'll see how this all shakes out in the end ...

It disappointed a lot of people by not wrapping up all the many thousands of dangling plot threads. I've just rewatched it and it tells the story better than I thought it did. Much like many Homestuck animations, it can only really be appreciated after multiple viewings once you know what's coming and why. I think part of it is that Homestuck has so rarely updated the last few years, we've forgotten that the comic "wrapped up" all these plot threads many times over previously. Going back to reread "Caliborn's Masterpiece" helped, but basically Hussie foreshadowed all of this ages ago. That doesn't mean it lands or feels like it's all in the right order, but I can 100% see why to him this would be a complete ending.
Support Me at Patreon! Art Gallery Facebook Tumblr TygerbugGarrett@Twitter Ocpmovie@Youtube
Top

A great anthology of Bobby London's Dirty Duck is coming from IDW next summer (maybe fall)
Bobby isn't at ease with Photoshop so I colored the cover for him. It feels weird to see it now on all the comics websites.
I don't fool myself - it's not much and it's not even paid. But I've been glad to help and to be a tiny bit involved in this book.
I guess I'm doomed to always work with ducks :) 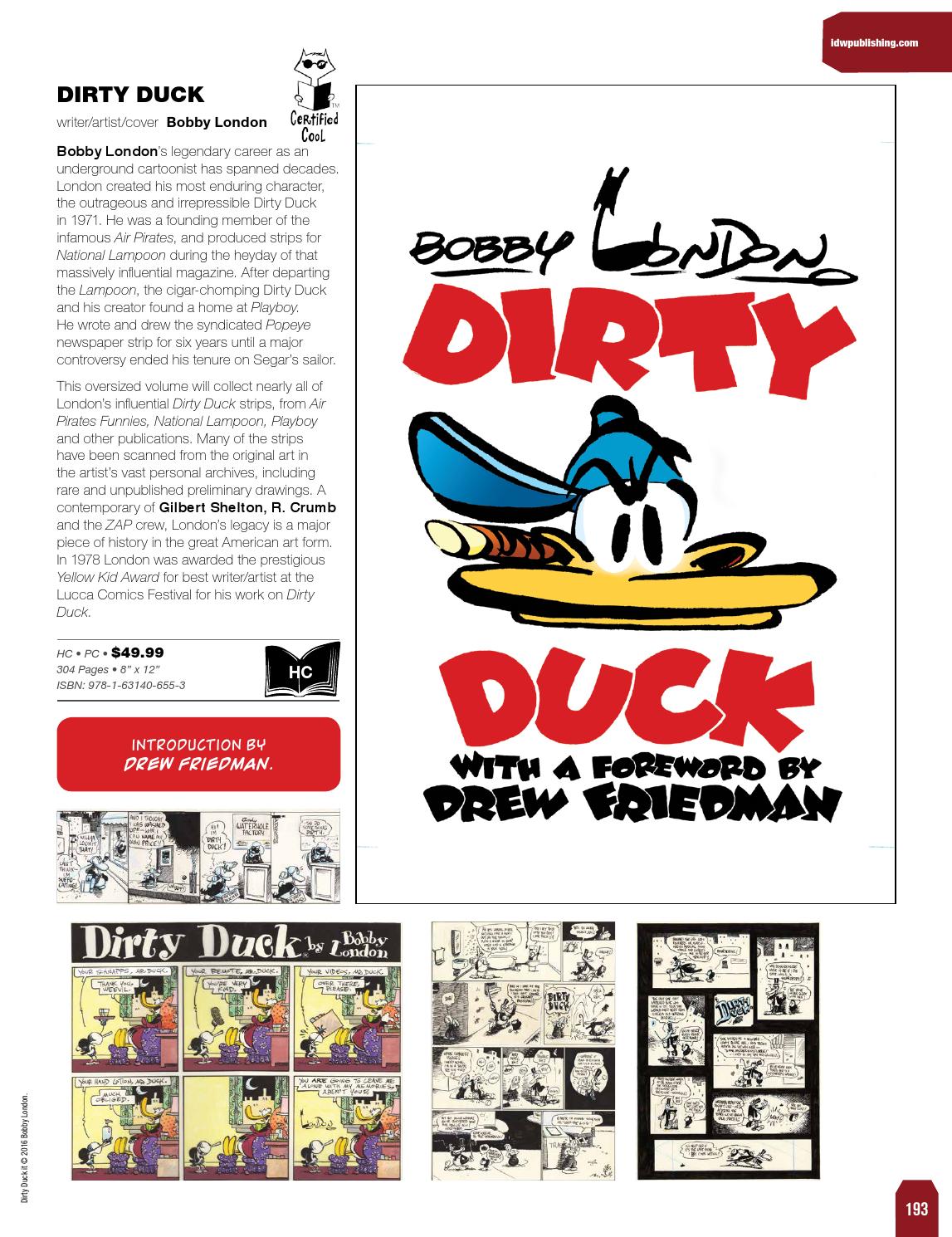