Hi there! I thought I'd come back on here again, especially to reply to the last message from a long while back. I was really curious about accessing the bootleg of the Rag Dolly show? I know its been circulating around the internet, but its hard to get ahold of from anyone that seems to have it. The download links in this thread don't seem to work anymore, so is it possible, if y'all still have the bootleg, to post another download link? Or maybe post it on Google drive, since a lot of bootlegs tend to reside there nowadays. It'd be really neat to hear the songs in their full form rather than the just the demo..! Thanks!
Top

Email me - gilchristgarrett at gmail dot com, I'll look for it at least.

As I recall, the demos are higher quality, and I don't think we ever had the show in full, but excerpts from what might still have been a rehearsal version.
Support Me at Patreon! Art Gallery Facebook Tumblr TygerbugGarrett@Twitter Ocpmovie@Youtube
Top

You have probably received many many inquiries about releasing a 4K version (or at the very least, an HD version) of the Musical Adventure 1977 film. I recently found the SD 9-part version released on youtube (which I readily downloaded so my kids could watch this most excellent, memorable and adorable film). So I pose the same question. Will you be able to release this film in 4K restored or unrestored? My apologies if you have already answered this question a million times. ^_^ If you are ever able to release a HD or UHD version, I would be VERY interested in downloading it. Perhaps you might even release it as a torrent? I could help seed for a good bit and spread the news.

Thank you for considering!

Hello JB. The SD version was done about ten years ago now.

We do have access to about six complete prints of the film and an HD or 4K version has been planned for at least five years. (Indeed there is one unrestored HD reel on Youtube.) However, the amount of restoration required would be vast, and so we wanted to get the rights to actually do the work for a commercially-sold Blu-Ray. H has access to some of the prints, and in theory could do an unrestored transfer, but hasn't yet.
Support Me at Patreon! Art Gallery Facebook Tumblr TygerbugGarrett@Twitter Ocpmovie@Youtube
Top

Wait, six complete prints? Not reels, but six complete sets of reels? Seriously?!
If they can all be transferred the compositing possibilities (if the natural warping isn't too bad of course) would benefit a restoration immensely!

Regardless of that, sign me up for the restoration crew if the rights can be obtained, I genuinely un-ironically love this film warts and all.

Side note: Curiously a sound effect used in 200 Motels for "goofy drinking" is used for the makeshift boat scenes in Raggedy Ann later on. The two films have no production company relations as far as IMDb is concerned, including dubbing, so how the sound ended up in both films is a delightful mystery to me!

If only a lower-generation tape for Disco Dolly turned up, it'd make a nice Easter Egg, if those are still done.
Top

Thanks for the info. Hopefully you guys will get the rights and can begin a lucrative journey into the hearts of another generations of kids who can benefit from the excellent wholesome themes in the film. I know I'd have to buy myself a copy or two for my own future kids. The shows out these past couple decades have been weak in the morals department, but Raggedy Ann has always had principles that are timeless. (Perhaps I'm just biased since I remember seeing the film when I was a little boy.)

Anyway, here's to hoping you guys get the rights to it. (I'm a audio engineer. Keep me in mind if you need help cleaning up some audio or anything like that.)

Hi Garrett
I just made an account on this forum to say that I discovered this film a few days ago, never having heard of it
Having since watched it I think it's actually pretty fun and it's such a shame that it's been pretty much abandoned

if there has been any progress on the HD version I'd personally love to see it
even if it was just the least damaged reels put together and presented pretty much as-is, I'd still be first in line to download it because I think this deserves to be seen in HD
Top

Here's something you may find interesting - I've had a crack at restoring the artwork from this old ad for the movie as best I can: 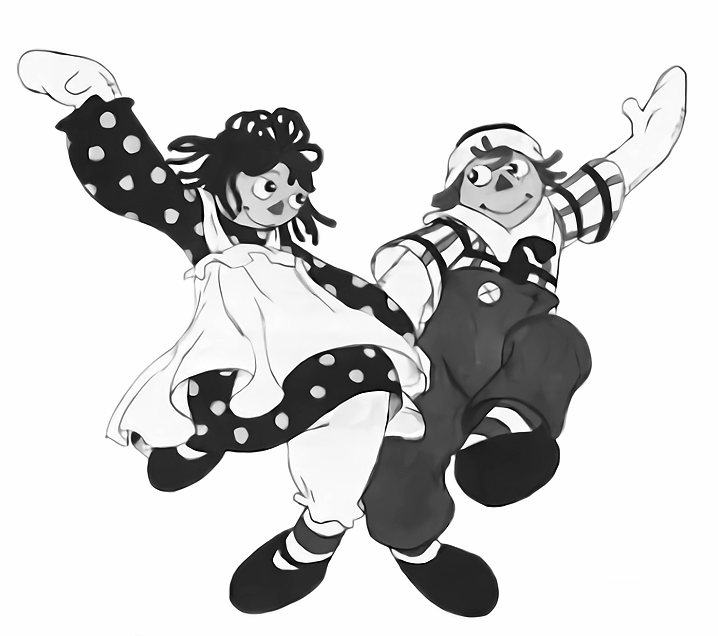 most of the hard work done by the waifu2x upscaler, plus some manual restoration in Photoshop to isolate the characters from the background + manually fill in a few areas with solid colour to cover up some artifacts
Top

Hi RaggedyMan. Not bad work. I have a better upscaler these days but it's slow and often crashes.

We've been talking about doing a proper Blu-Ray restoration for at least six years, but Steve never did figure out the rights situation. If he did, I expect he might do it himself without my involvement.

Perhaps we could crowdfund a straight transfer of some of the film reels in HD - Helge never got round to doing it previously.
Support Me at Patreon! Art Gallery Facebook Tumblr TygerbugGarrett@Twitter Ocpmovie@Youtube
Top

Not a bad idea about the crowdfunding. With 4K HDR technology these days, this movie would be pretty amazing. Just need to spend the time cleaning up the multiple reels of film you guys have. Getting all the grit, dust, and particulates off will indeed be a daunting task. But the cleaner it is, the clearer it will be when digitally transferred.
As for who holds the rights, you may consider finding the original creators of the characters (not the animation). Usually they will have the latest on the legal side of things. More often than not, if they still retain all the rights, you may not have to ask a motion picture company about the rights.
On the other hand, speaking to major motion picture labels may be a faster route. Usually those people have a deeply-seated involvement with other film houses who may be able to get you pointed int he right direction. Just a few phone calls away, I suppose.
Either way keep me posted. If it is within my experience and power, I would love to help get this project off the ground.