The Thief and the Cobbler: Recobbled Cut Mark 4

Seriously though, he heavily resembles both.
Top

Actually, I find this kind of amusing, because while the majority of the animation for the DuckTales movie was done at Disney's French studio, part of the film was done in London (Larry Ruppel, an American animator who worked on the French team, says it was the first 10 minutes), by some of the same people who would go on to Thief; if I'm not mistaken, I believe it was also at The Forum.

But either way, it's a complete coincidence - the characters designs were done in the States, and this guy is in keeping with the Barksesque "dognose" look of non-duck characters throughout the entire series.
Top

Just kidding ; writing about Barks happens to be my main job.

I've got no opinion about this dog nose / Wile Coyote stuff ; I think Dijon looks a lot like the Thief on those pics, especially with the trousers full of money. Nothing more. Coincidence or not ? You decide.
Top

Garrett Gilchrist wrote:
The credits in the program given out to us were very brief and very incomplete, written up from Richard's memory. The older master animators who had taught the younger crew were listed, and a handful of the newer animators, but not many.

He then sat for a Q&A session, which Sam Sleiman recorded here:
http://www.sendspace.com/file/f7yk8o

I feel that the (mostly young) animators who worked on the film during major production from 1990-1992 get overlooked, as they did exceptional work learning and living up to Richard's standards.


Regarding the Q&A session which Sam Sleiman posted here: http://www.sendspace.com/file/f7yk8o , starting around the 4:38 mark (of the first audio file) Dick mentions “two marvelous Turkish animators” whose names he has forgotten. Those two animators are Tahsin Özgür and Sahin Ersöz . Tash animated the Dying Messenger.

On Sahin Ersöz's website he lists his work on the film as animating the Mighty One Eye and also as a layout artist on his sequence.

I'll just add that on Tash's blog he has posted a partial pencil test of the Dying Messenger and also a photo of himself , his assistant (Sharon Smith) and inbetweener (Mark Williams) with the drawings from the scene. 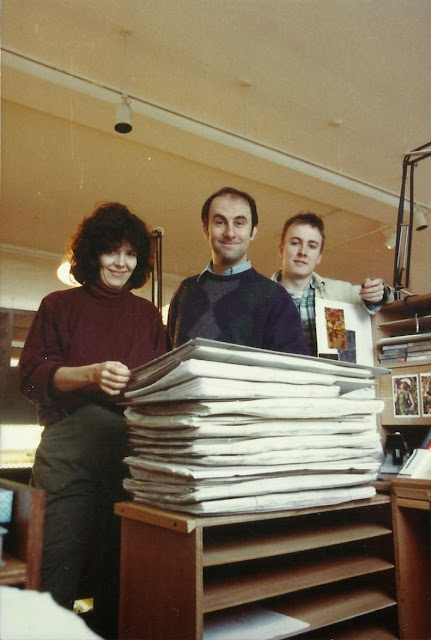 
Tahsin Ozgur: "The Richard Williams film The Thief and the Cobbler was already a legend when I joined the production in London in October 1990. The film had been in production, on and off, for about 25 years by that time and Richard Williams, fresh from his Oscar-winning animation direction of Who Framed Roger Rabbit, had obtained a contract to complete his epic in two years. My compatriot, the excellent animator Şahin Ersöz, also joined the team at the same time and contributed some amazing scenes. Unfortunately, Richard Williams could not meet his contractual deadline, and the film was completed by other studios, with great changes in the concept and a lot of scenes deleted because they were perceived as being extraneous to the story. There are various “completed” versions, released on video, that have little to do with the original vision. A few years ago, some enthusiasts salvaged the lost animation and cut together a version that is as close to the original concept as possible. They called it The Thief Recobbled, and just recently, much to my surprise, I saw that someone had put it on You-Tube. It brought back memories, of course, and so I decided to share one of my scenes with you here. I animated this character, and his horse, in all of their scenes. I left the studio, exhausted, at the end of May 1991. Şahin stayed on much longer."


Tahsin Ozgur: "The last thing I blogged was the slow-motion gallop of the "dying messnger" from The Thief and the Cobbler. Today I'm putting another scene from that film- apart from our private film Kebabaluba , which was one scene with no cuts (see entry of 10 Sept- Eylül 2010), this was the longest scene I was ever to animate. It takes close on to one entire minute of screen time, and if I remember correctly I worked on it for a month and a half! The year was 1990, we were living in London, I had to put in a regular 11-hour day, not counting the lunch breaks, and I was newly married- poor Lale! Our director Richard Williams had a predilection for animation on "ones" (a new drawing for every frame, 24 drawings a second). However, the film had to be finished sometime so he instructed us to make our animation on "twos" (one drawing for every two frames coming to 12 drawings per second, except in exceptional cases) and to keep to that even if he said otherwise. I followed his instructions, but then he asked for a strong wind "like in a Kurosawa film" so for wind-blown elements like the flags, mane, tail, stirrups, I made my animation on another level, on ones, matching the character animation on twos. Towards the end of the color version of the scene, lower screen left, you'll notice two characters who try to move only to collapse again. The first to move, further from camera, was animated by Mark Williams, my inbetweener at the time, the second, closer to camera, by Sharon Smith, who was my assistant."

The correct torrents (of the September 17 2013 version) are in the directory at http://orangecow.org/thief/?C=M;O=D


I noticed in your Recobbled cut that the POV sequence of Tack in his
cell, weaving the string-portrait of Yum-yum, is finished in your
version but not in the workprint. Is this because Calvert had it
colored in?

No, the footage was finished by Dick Williams (and is in his workprint), but is rare. The scene was cut short by Calvert to remove a fadein. I recreated the material by hand from low quality sources.

I will say that the "bubbles" shot of The Thief interrupting Yum-Yum's bath seems to have been finished and shot by Neil Boyle's company rather than Dick, but was done in Dick's style, unlike a lot of the other footage.

If you have further questions about Dick Williams' own, previously unseen workprint, a writeup of that is just below the writeup of the LA trip.
Support Me at Patreon! Art Gallery Facebook Tumblr TygerbugGarrett@Twitter Ocpmovie@Youtube
Top
Post Reply
1940 posts