Thanks! I've reposted on my FB .... as should everyone. :D
Support Me at Patreon! Art Gallery Facebook Tumblr TygerbugGarrett@Twitter Ocpmovie@Youtube
Top

Whelp, I've been a bit behind, but here's another Muppet Classic.

I have just learned that Julie Andrews: One Step Into Spring is soon to be getting a DVD release. Here's to hoping that it won't get edited to shit.

For the few who are unaware, Disney in their infinite laziness and/or idiocy botched their First Season release of one of the greatest variety shows on to have graced television, The Muppet Show.

First of all, they didn't include the pilot versions of Episode 1 & 2, which while that is quite lame, it isn't too big a mark off.

Now I'm fine with some of the changes they made, such as replacing the closing shot of Zoot with the ITC logo with a later 1980s shot with The Muppets Holding Company information instead. Even though ITC Entertainment co-produced The Muppet Show, and it's pretty damn rude not to include their logo, that's not that a big deal since Disney owns the Muppets and obviously would rather have their copyright info at the end. Two episodes are also missing fades to black, which normally indicate a commercial or end of scene, but since it's obvious the scenes have ended anyway and nothing has actually been cut from those moments, that's just a nitpick.

The real crime is that they actually cut down the episodes themselves evidently due to two reasons. The first reason is the use of an early edit of episode 3 and obviously not doing research to make sure what they're releasing is correct. The second is the most evil of all, that horrible hell pit that is music licensing,

In the Joel Grey episode cut things were the song Stormy Weather (But since it was only the first 12 seconds of it, that's just a sample and thus it's fair use and shouldn't have needed to have been cut anyway), and because of dumb oversight and lack of research a one-frame shot in the opening of Zoot & Crazy Harry between Animal & Rowlf, not one but two Muppet News Flash sketches, and a Statler and Waldorf scene were not included.

Cut from Jim Nabors were the two songs Gone With the Wind and The Danceros.

In the Paul Williams episode the opening number All of Me was removed.

And horrors of horrors the Vincent Price episode had an exorcist take out the closing number You've Got a Friend.

Because of these failures I have uploaded these five wonderful episodes in their uncut forms for the enjoyment of all (in various quality, two of which being Disney Channel airings, the other three you need to manually force the aspect ratio 4:3).


It's still worth getting Season 1 but not without complaining to Disney about it. Do not however let this put you off of getting Seasons 2 or 3 though, as they were much better and thankfully unbotched releases (even though Season 2 wasted bonus feature space on a Weezer music video and modern comedic joke interviews, instead of real interviews or archived footage).

Some [all?] of these were previously released uncut by Time-Life as well.

ctlw83 wrote:I also have whatever KermiClown http://www.kermiclownvideos.com/ has in terms of the Jim Henson Hour on DVD. These are grabs from VHS put onto DVD and are of varying quality. I believe the Secrets of the Muppets episode was of decent quality. However, the Muppet Muscicians version he has is the edited down Nickelodeon airing of it. I have the un-cut HBO version. 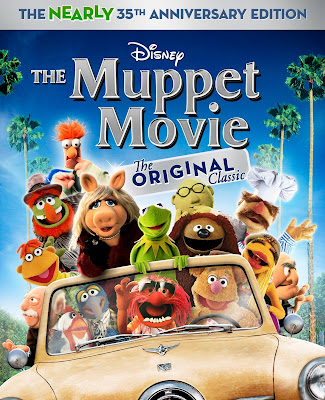 Celebrate The Nearly 35th Anniversary of the ultimate frogs-to-riches story with the one that started it all -- The Muppet Movie. Laugh along with the mostly-true story of the Muppets got their start, now for the first time ever in vibrant Blu-ray hi-def picture and sound.

From the very first 'plunk!' of Kermit's banjo playing 'The Rainbow Connection' (Oscar nominee, Best Original Song, 1979), to the hysterical road trip that brings our fearless frog together with Fozzie, Gonzo, Animal, and most importantly of all, Miss Piggy, join the jam-packed heartwarming hilarity, outrageous antics and big-shot Hollywood cameos. It's bursting with hilarious bonus extras including an all-new Frog-e-Oke sing-along with your favorite Muppet songs.

As Kermit and the gang sing -- 'Life's like a movie!' Make The Muppet Movie part of your family, and have the time of your life as the Muppets share laughter and fun with 'the Lovers, the Dreamers...and You.'