The last two Office episodes have been great - double-length and letting the drama play out. They're ending it right. Community's last two weren't at all bad either, considering. It's probably unfortunate that Community has been renewed for another season, though. On Parks and Recreation, Ron Swanson may be having a baby with Lucy Lawless [Xena]. Whether it's a boy or girl, I sort of think that child should lead us.
Support Me at Patreon! Art Gallery Facebook Tumblr TygerbugGarrett@Twitter Ocpmovie@Youtube
Top That comic doesn't get much love on the internet. 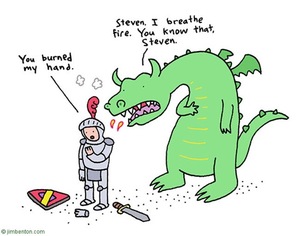 Garret asked me to write about the sound mix of the USA/Canadian cut of the film, because he owned a bootleg of the film back in the day.

In 2009, if I am not mistaken, Unearthed films decided to release Rock & Rule with a new fresh transfer, but by the time, all of the original negatives were destroyed, so they had to restore it from a Ring of Power print, which was an alternate version that MGM released.

They went on and restored the audio, like how the Yellow Submarine audio/video restoration went; it was an noble and ambitious decision, but it seems that they didn't do a good job.

First off, the quality of the voice-actors recordings is really bad, it sounds like a really old recording tape.
You can barely hear the Synth score in some points, while in others it's too loud, and there are even moments where the score plays where it shouldn't be playing!
The 'Born to Raise Hell' scene was fixed, but the background vocals are too low to be listened, the case is similar with a lot of other scenes, most noticiable, the Send Love Through Finale, which is known for taking over 800 takes altogether to make, they didn't chose the right takes for this one; it sounds like a mess, sometimes you can hear Debbie Harry, but can barely make out Robin Zander, other times there are inferior takes for Robin Zander without Debbie Harry in the BG, and so on.

I'm using the Canadian VHS source as a main reference of how the songs should sound like, but there are also the B-side releases.

Sounds Effects missing, Back-up vocals sounding lower-higher than they should be, the redubbed voices, the re-written dialogue and the fact that they decided to restore the audio with Paul Le Mat as Omar, makes it an inferior Sound Mix compared to the Canadian VHS one, which btw, they also restored the audio and sharpened the video a bit, not a bad work at all.
Top


Thanks for the report. You've listened to both the 5.1 and 2.0 mixdown [if there is one] on good equipment?

Sounds like they tried, but didn't really get it right.
Support Me at Patreon! Art Gallery Facebook Tumblr TygerbugGarrett@Twitter Ocpmovie@Youtube
Top

Yesterday [Sunday] I turned on my Livestream and screened a few B-Movies. Lineup was as follows:


Fun was had during Voyage of the Rock Aliens in particular. Very few people were watching after the first three films aired, but I kept it running.

I would normally delete this sort of stream from Livestream's server, but when I shut down last night, the second half of the stream saved itself. Which I didn't intend, but oh well. It's a stream of The Humanoid, Voyage of the Rock Aliens, and part of Rock & Rule.

I am also currently seeding the DVD of Voyage of the Rock Aliens at TPB, along with the film's soundtrack.


They've come from outer space ... to play 80s New Wave music! A wonderfully bizarre treat for fans of bad movies. Movies don't get much more 80s than this.

Watch in delight as Devo wannabes from outer space (Rhema) do battle with rockabilly greaser Stray Cats wannabes (Jimmy and the Mustangs), all for the love of Pia Zadora. And Jermaine Jackson shows up wanting to be Michael Jackson.

Michael Berryman (The Hills Have Eyes) plays the chainsaw killer who escapes from an asylum, straight into the heart of bobby-socks-wearing mechanic Allison LaPlaca!

While Pia falls for a spaceman and engages in bizarre musical numbers, her abusive asshole boyfriend (Craig Sheffer) climbs around on rocks, posing and pretending to be a cougar-man. Pia eventually goes back to him, making this the most true-to-life ending of any Hollywood film ever. Women love attractive jerks. That's the way it is.

Directed by James Fargo ("Any Which Way But Loose") with cinematography by Gil Taylor ("Star Wars," "Flash Gordon"), and Dante Spinotti ("Last of the Mohicans," "Heat," "L.A. Confidential").

Filmed in November and December 1983, the movie was intended for release in 1984, but sadly no one appreciated its genius at the time.


"James Fargo the Director of Every Which Way But Loose brings you a fun filled spoof of everything from music videos to science fiction of the fifties.

Spectacular special effects combine with great dance music and outrageous humour to form a hilarious out of this world science fiction rock and roll adventure. Craig Sheffer plays Frankie, the leader of Speelburgh's local High School rock and roll band called the Pack and meets and falls in love with Dee Dee a young singer. The couple are in for an exciting time when a guitar-shaped space ship streaks through the skies and lands in their town! What emerges from the weird craft? Rock Aliens of course! But these aliens haven't come to rock and roll. They've come to destroy!

Will Dee Dee and Frankie save the world from death and destruction? Will Frankie have some close encounters? Will the guitar ship leave the world alone? We won't tell you! You'll just have to take our word that this is THE fun flick to see!"

All TV series of Star Trek is available for streaming, for free, on the Star Trek website. For this month only.