It's funny how the internet era has given us new cliches and urban legends, like that of the "haunted game cartridge."

In 2011, someone calling himself Cosbydaf posted a story about playing a copy of the 1988 NES Godzilla game. The game turns out to be aware of the player, and possessed of a demonic fury which will test the player's soul. 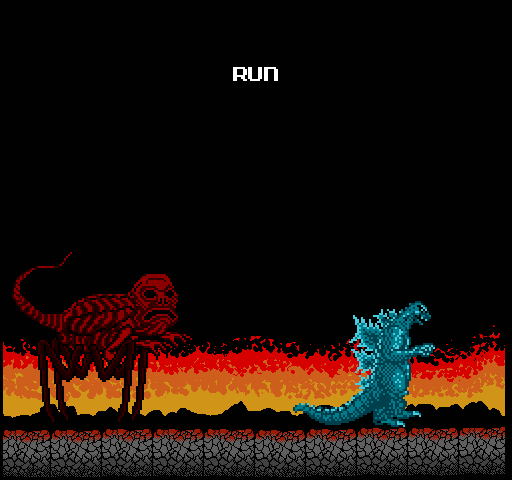 An unfinished sequel, "Godzilla Replay," followed in 2012 and 2013. It's nice to look at but so far the story isn't very interesting. Lots of sprite work was done which has not yet appeared.

The "NES Godzilla Creepypasta" is now being accurately adapted into an actual video game (by Psyke), which is pretty wild. Gameplay is adapted from the 1988 NES game, before veering off into its own dark territory. A demo is available of the first stages.

So far the game adaptation even improves on the original story with its graphics, which are all (I think) at the same resolution, so far, and have believably SNES-like water and fire effects. The original doubled the resolution of its elements inconsistently, and I'm not seeing that in the game adaptation yet.
Support Me at Patreon! Art Gallery Facebook Tumblr TygerbugGarrett@Twitter Ocpmovie@Youtube
Top

Is this gonna have the ghost girlfriend too? That's the most important part.
Top

I've heard they might be cutting or rewriting her, which would be a shame.
Support Me at Patreon! Art Gallery Facebook Tumblr TygerbugGarrett@Twitter Ocpmovie@Youtube
Top

Kickstarter to fund a new recording of Miklos Rozsa's complete score for King of Kings (1961) by Tadlow Music.

but that's none of my business
https://pbs.twimg.com/media/DRW5CKSUMAAfm8Y.jpg
Support Me at Patreon! Art Gallery Facebook Tumblr TygerbugGarrett@Twitter Ocpmovie@Youtube
Top

filmfan94 wrote:Kickstarter to fund a new recording of Miklos Rozsa's complete score for King of Kings (1961) by Tadlow Music.

For anyone who has been paying attention to this Kickstarter campaign, it just hit its goal a few minutes ago with recording sessions to begin sometime next year.
Top